People still talk about the amazing Emma Gatewood nearly 50 years after her death, but “the Embodiment of Hope, Determination, and Courage” befits her best.

WHO WAS EMMA “GRANDMA” GATEWOOD?

Sometimes the greatest among us start with the humblest of beginnings. Emma Gatewood started out with all the cards stacked against her, but she completed great feats – and stayed humble – throughout her life. 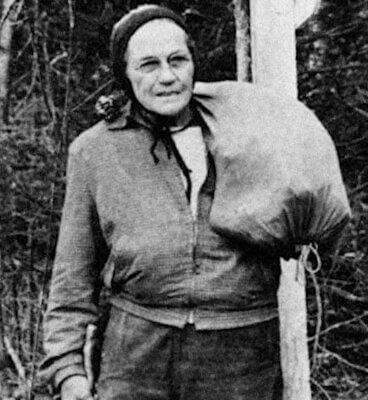 Emma Gatewood, often referred to simply as “Grandma Gatewood”, gained fame when she hiked the entire 2,168-mile Appalachian Trail at the age of 67 by herself.

This amazing woman made the trek bringing only a pair of Keds sneakers, a plastic shower curtain, an army blanket, and a single change of clothes in a homemade pack. She got the idea to make the hike after reading about the trail in the National Geographic magazine. Not only did she do it once at age 67, but she also did it again at age 72 and a third time at age 75.

Emma was born into a poor family with 15 children in 1887 in rural Gallia County, Ohio. She only got to go to school up until 8th grade, but she read encyclopedias and taught herself about plants and animals.

She married at 19, and soon found out she had married a physically abusive man. She had 11 children. When her husband was violent, as was often the case, she’d retreat to the woods. The woods became her refuge. In 1941, after 33 years of a bad marriage, she finally was granted a divorce.

She first hiked the Appalachian Trail in 1955 at age 67 after telling her grandkids she was “going for a walk”. She was the first woman to ever hike the entire trail solo. She hiked it again 2 years later in 1957 at age 69. After that, she hiked the 2,000-mile Oregon Trail 2 years later in 1959 at age 71. Then, at age 73, she hiked the Appalachian Trail again. This gained her notoriety for being the only person to hike the entire trail 3 times. She continued to hike up until her death at age 85 in 1973.

During her hikes, she hiked about 14 miles a day. After she finished, her story appeared in a lot of newspapers and magazines. She used this opportunity to talk about how the trail had fallen into disrepair, which prompted people to take notice and promote the upkeep of the trail.

It certainly wasn’t an easy task – not the first time, the second time, or the third time. She was once quoted as saying, “I never would have started this trip if I had known how tough it was, but I couldn’t and I wouldn’t quit”.

We aren’t just defined by what we do, though. We find out more about people by listening to what they say, don’t we?

Here are some of Emma Gatewood’s thoughts and ideas, expressed in her own words:

Obviously, Emma had an incredible sense of determination and grit.

Emma reminds me to take an honest look at my life.  What could I accomplish if only I set my mind to do it?

What Will You Do?

Emma Gatewood was an amazing woman, without a doubt.

But, don’t let this be one of those articles that you read, and then CLICK! – you skip off to something else and then – WHAM! – you already forgot about her story!

Instead, take 1 minute – RIGHT NOW – and jot down the answers to these 5 questions. Tuck it under your pillow, or save it on your phone and re-read your answers when you wake up tomorrow morning.

Emma Gatewood was an asset to our world and a true inspiration – and so are you!

Does Emma Gatewood inspire you?  If not, who DOES inspire you to accomplish something bigger than you’ve done thus far?

Get these 5 Questions in Google Docs

Click the button to get a copy of these 5 questions in Google Docs. You can print it, save as pdf or as a Word doc, or share with others.

Just be sure to click “File > Make a Copy” as soon as you open it (to make it yours).

GET THE 5 QUESTIONS IN a GOOGLE DOC

Get inspired from amazing women who aren't famous but are amazing women nonetheless. This gallery is for women nominated by our readers.

Tell us about the Badass Woman You Admire:

Click here to nominate a woman you know to the Badass Women We Love Gallery.

by Michele time to read: 8 min